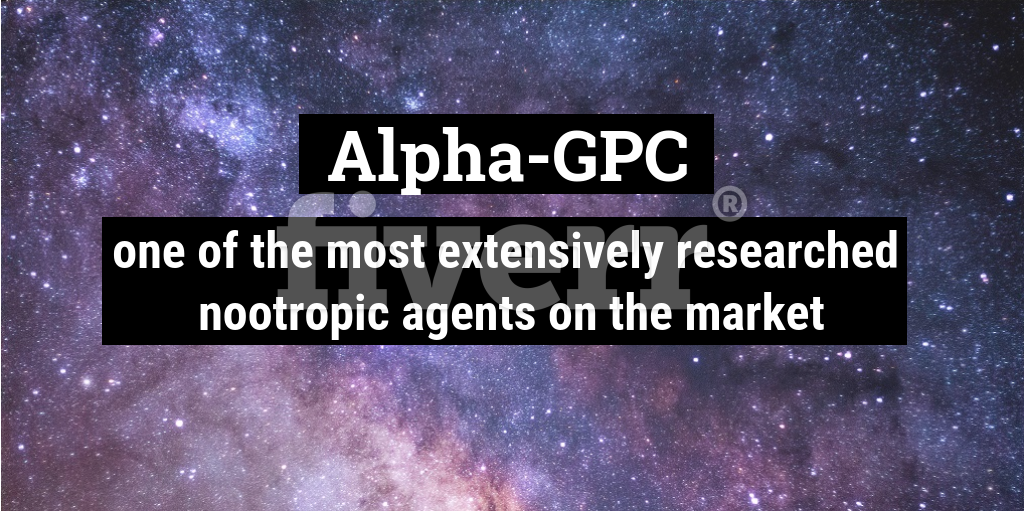 Alpha-GPC is one of the most extensively researched nootropic agents on the market. Most of the research carried out so far on human test subjects was focused on its effects on patients with dementia (predominantly Alzheimer’s disease, but other dementias as well). The results were quite impressive- it turns out that Alpha-GPC affects and improves virtually all cognitive functions- perception, attention, memory, problem-solving, decision making, etc.

This effect is achieved by increasing an amount of dopamine receptors in a synaptic cleft, that way augmenting its effects. In the brain, dopamine is involved in circuits responsible for reward and motivation.

GABA is one of the most important inhibitory neurotransmitters- it regulates most of the excitatory impulses throughout the central nervous system. As a result, it relieves anxiety, improves mood, attention and other cognitive functions.

At the moment, there are no scientifically approved recommendations about the appropriate dose. The dose depends on a user’s age, overall health, and possible comorbidities. Manufacturers recommend a daily intake of 300-600mg. The risk of side and adverse effects at this doses is minimal since the amount used in most of the research studies exceeds 1000mg daily.

The supplement is considered to be safe is used in recommended amounts. Rarely, some people experience heartburn, insomnia, headache, skin rash, dizziness, disorientation, and confusion. All of these effects are temporary and mild.

Using alpha-GPC during pregnancy and breastfeeding period is not recommended.

The substance has strong hygroscopic properties, meaning it absorbs moisture from the air quickly. The result- it turns to gel if left exposed to air. Although the supplement does not lose its properties even after it “picks up the water,” accurate measuring is no longer possible (due to high water content).

Keep it in a freezer and tightly sealed. Minimize the air exposure as much as possible. If purchased in large quantities, it’s highly advisable to split it into monthly packs and keep it in vacuum bags.

Typically, people report improvement after taking the supplement for two weeks. Some say they noticed elevated mood and sense of optimism while others report improved memory, recall time, motivation to work and study, better sleep. The cholinergic effects of a supplement are particularly attractive to patients suffering from narcolepsy- so far, the experiences have been somewhat positive.

[1] Parker, A. G., Byars, A., Purpura, M., & Jäger, R. (2015). The effects of alpha-glycerylphosphorylcholine, caffeine or placebo on markers of mood, cognitive function, power, speed, and agility. Journal of the International Society of Sports Nutrition, 12(Suppl 1), P41.