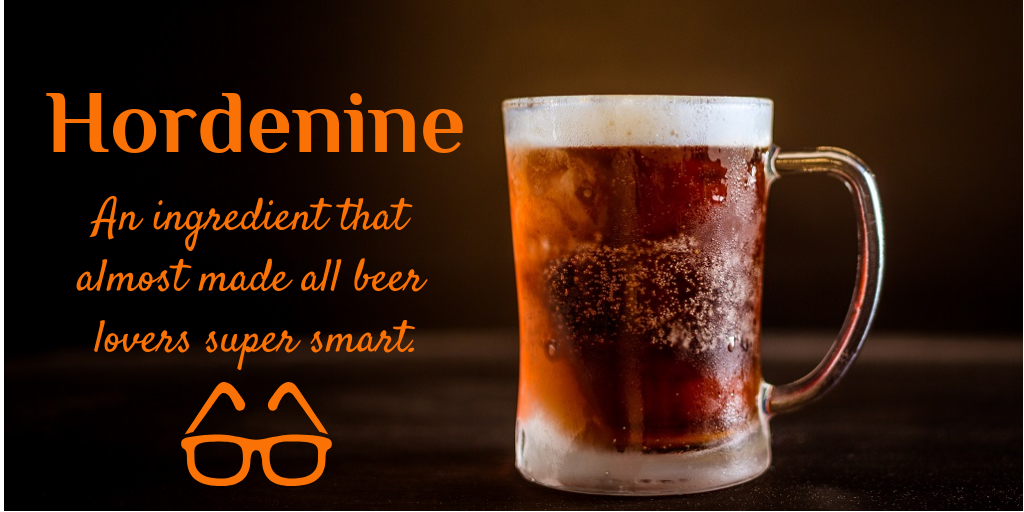 Hordenine is a nootropic supplement similar to phenethylamine that can be found in some plants among which the barley is probably the most common. Other than in barley, various species of cacti produce- the riches source of Hordenine in nature is the cactus Echinopsis candicans.

Its antimicrobial effects are much more important today than those on the central nervous system. Hordenine is also a biological marker of beer consumption. At the moment, manufacturers promote it as an agent that stimulates the central nervous system and helps weight loss by speeding up metabolism. Some research studies conducted on animals show that in excessive amounts (administered parenterally- injection) it causes the cardiovascular system disturbances such as increased blood pressure and arrhythmia, as well as symptoms of hyperexcitation of the central nervous system. All of the effects mentioned above (desirable, nor adverse!) has not been reproduced after oral intake. Without further ado, let’s jump into the story of Hordenine, it’s apparent mechanism of action, dosage, side effects, etc.

The exact mechanism of action is yet to be discovered. Here, we will discuss the theoretical principles of Hordenine action.

At the moment, it seems the most probable mechanism of action is an inhibition of MAO. MAO (Monoamine Oxidase) is an enzyme that breaks down neurotransmitters in synaptic clefts, limiting their time of action. Hordenine, by blocking the action of MAO to a certain degree, indirectly increases the effects of different neurotransmitters. According to manufacturers, by doing so, it promotes cognitive abilities, memory, mental focus and overall intellectual performance.

The recommended daily dose is 20-50mg, depending on the age, body weight, comorbidities, etc. The suggested dosage relies on animal studies results and anecdotal evidence.

Safety concerns, side and adverse effects

Avoid taking it during pregnancy and breastfeeding period since no reliable research studies are addressing the issue. It might cause high blood pressure and heart rhythm disturbances if taken in excessive doses. It might increase the risk of kidney stones. Those with a family history of kidney stones should stay on the safe side and avoid it. In case you are going to have any surgery, stop taking Hordenine at least two weeks before the intervention.

So, does it works?

The scientific community lost interest in researching the effects of Hordenine on intellectual capacity and metabolic rate more than 20 years ago. Not because they couldn’t identify any, but because they are mild and last just a few minutes after parenteral administration (injection). The effects after oral administration have not been proven at all. The claims of Hordenine weight loss promotion also lack scientific confirmation.