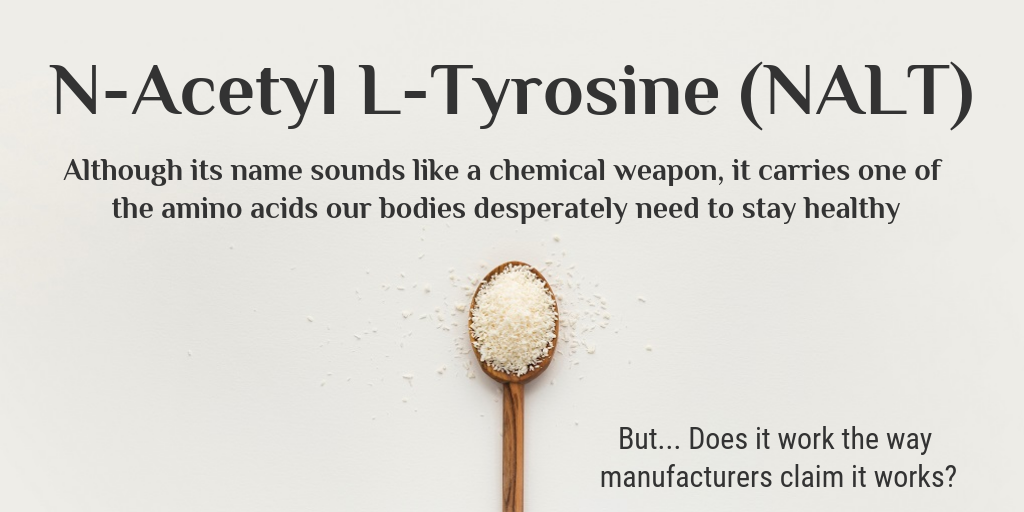 Although its name sounds like a chemical weapon, it carries one of the amino acids our bodies need on a daily bases to improve, build, heal, repair and maintain its function. The l-tyrosine as an amino acid is unusually important for proper brain function. In this article we will discuss why is that so and whether or not you can improve brain’s function by taking tyrosine supplements.

L is just an isomeric form of a molecule- the human body can utilize only l-amino acids- besides L, there is a D form as well. Acetic acid (N-acetyl) is added to the molecule of L-tyrosine to improve the bioavailability of a supplement (resorption rate from the intestines).

All theoretical concepts describing the supplement’s mechanism of action are effects of increased dopamine synthesis in the brain due to an increased amount of L-tyrosine.

But, does it works? Stick to the end, and you’ll find out!

What does dopamine do?

Dopamine is one of the most important neurotransmitters in the central nervous system. The lack of it causes cognitive dysfunction such as mental fatigue, depression, mood swings, forgetfulness, inability to handle stress, inability to concentrate and many other problems. Also, many neurological diseases are associated with dopaminergic abnormalities, such as Parkinson’s disease, schizophrenia, Huntington disease, etc.

On the other hand, boosting dopamine production in the brain causes exactly the opposite effects- it’s a vital part of the neurological circuits that regulate learning processes, reward, motivation, emotions, motor control and others.

Just like in case of other nootropic supplements on the market, the explicit instruction on how much and how often to use the supplement is hard to find. The good news is- it’s just an amino acid- if you take too much of it, the chances are your body is going to use it for other purposes (not only as a dopamine precursor), such as synthesis of noradrenaline, adrenalin, coenzyme Q10, or just burn it to get some energy.

A typical dose among the users and the one manufacturers often recommend is 350-500mg a day, split into smaller doses and taken throughout the day.

People who take MAO inhibitors or suffer a migraine shouldn’t take this supplement. Due to metabolic byproducts of tyrosine, the populations mentioned above may experience worsening of their health issue.

In medicine, the supplement is used for parenteral nutrition (to avoid malnutrition in critically ill patients or those with certain metabolic diseases). There is no conclusive answer whether or not it causes the increase in dopamine production in the brain. The experiences of users are mixed- while some experienced improvements of their mental stamina and motor control, others can’t say the supplement has done too much for their wellbeing.

Unlike some other nootropic agents that might cause serious side effects, this one is somewhat safe (except for those who take MAO inhibitors or suffer migraine), so trying it, won’t do any harm and might cause some benefits.

From a scientific point of view- there are no reliable studies that prove N-Acetyl L-Tyrosine does what manufacturers claim it does- improve cognitive functions by promoting dopamine synthesis.