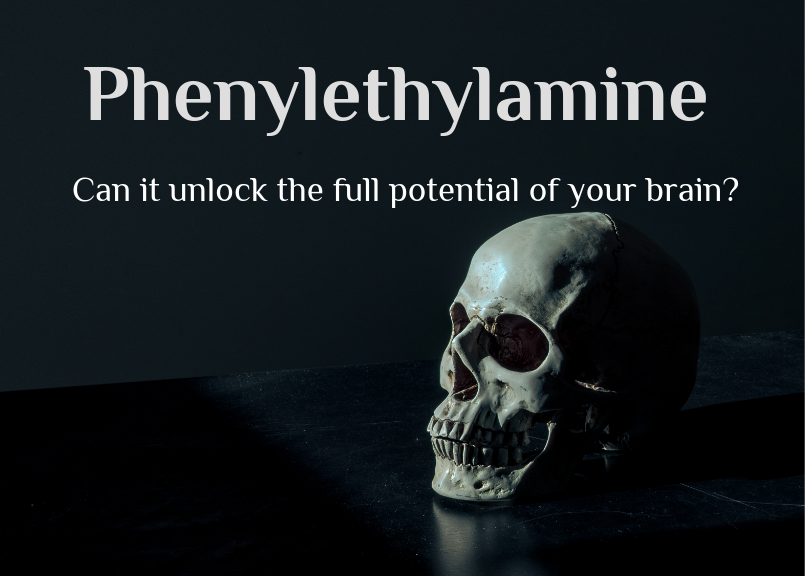 Phenylethylamine is a stimulant of the central nervous system. It’s a supplement from the group of so-called nootropic substances. Also known as “smart drugs” and “cognitive enhancers”, nootropics improve mental capacity, focus, creativity, motivation and elevate mood (or at least, that’s what manufacturers claim).

Chemically, it’s similar to amphetamine (this is why excessive doses of it cause symptoms similar to those that occur after amphetamine intake). The phenylethylamine uses include treatment of depression, various psychiatric conditions, for improving athletic performance, weight loss and improvement of mood and attention [1].

After binding to a certain receptor in the brain (TAAR-1 receptor) it activates a complex signal cascade resulting in a release of serotonin, epinephrine, dopamine, and norepinephrine. The responses to the activation of TAAR-1 include mood and cognitive function improvement, better focus, better memory, and mental well-being (actually, those are effects of neurotransmitters). After the neurotransmitters are released, phenylethylamine slows down their resorption from synapses, causing the effects to last a bit longer. Since the supplement is quickly degraded by monoamine oxidase (MAO), proponents advise taking it with MAO inhibitor supplements to extend its effects.

The phenylethylamine is not widely accepted among health professionals. It’s considered (not proven to be!) safe. The therapy doses and treatment regimens are not established. The recommended dose varies between different authors. Some authors point out the dose depend on whether or not it’s taken in combination with other nootropic substances or drugs. Others point out each individual reacts differently so everyone should find “their dose” by starting with low doses and slowly increase. In general, recommended dose varies between 100mg (“entry dose”) to 500mg daily (“optimal dose”).

Side effects may occur due to:

– interaction with other drugs, or

– by comorbidities (health conditions that might become more pronounced or worsen after taking the supplement).

Typical side effects include heartburn, a sudden increase in blood pressure, palpitations, sleep disturbances (particularly if the supplement is taken in the evening), and headache.

Those who already take medications are strongly advised to consult their doctor before taking phenylethylamine supplements (particularly those with arrhythmia, heart failure, hypertension and those with psychiatric conditions).

Research studies discussing health benefits and effects of phenylethylamine almost always contain the words “might”, “may”, “could contribute to” and other rather vague terms in the title. The supplement has its opponents and proponents, but it would be unfair to claim it’s widely accepted among doctors (just like all other nootropics). The activation of TAAR-1 receptors may improve symptoms of schizophrenia and depression [2]. Research shows that low levels of phenylethylamine in the brain correlate with depression.

Typically, consumers describe the “wave of happiness” 15 to 20 minutes after taking the supplement that slowly subsides after 20-30 minutes. The bigger the dose- the longer the “wave” lasts. After the initial kick, the state of alertness may last for a couple hours.

The reports vary between extremely positive experiences to not noticing anything.

None of the consumer reports about phenylethylamine nootropic effects is backed up by scientific research so far.

Phenylethylamine may interact with the following drugs: