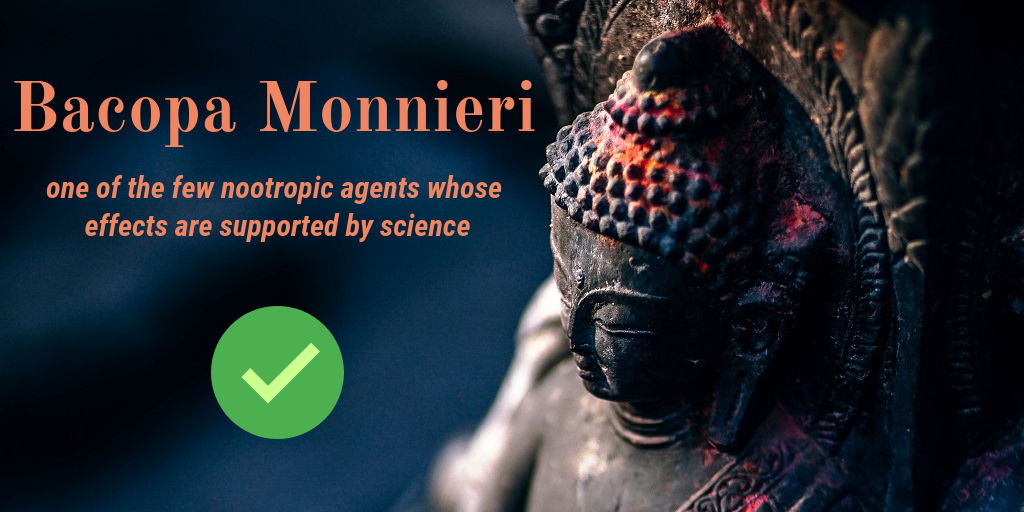 Bacopa Monnieri is a plant that grows on 6 out of 7 continents (except for Antarctica). Ayurveda doctors use it for 1400 years to treat asthma, epilepsy, swellings, tumors, ulcers, leprosy, anemia, enlarged spleen and digestive problems. Investigation of its health effects is generously funded by the Indian government for more than 20 years- for a reason!

As a nootropic agent, it has been around for a few decades.

The plant should not be mixed with other representatives of species since that might cause interactions between active substances.

Among the plant’s many active substances, bacoside A is the most important one. Research studies have described multiple different mechanisms by which Bacopa Monnieri improve cognitive function.

The bacoside A significantly slows down neurodegenerative processes and reduces oxidative stress in Parkinson’s disease and other health conditions that involve deterioration of nerve cells of the brain. This effect has been described and confirmed by more than 30 clinical studies. Bacoside A might become an effective treatment for Parkinson’s disease and dementia soon.

It enhances cognitive functions by increasing the number of neurotransmitters in synaptic clefts throughout relevant brain regions. The mechanism of this action is very complicated, includes different protein transporters, gene expression, enzyme activity and change of neurotransmitters levels (dopamine and acetylcholine, primarily).

Bacoside A acts as a vasodilator of brain blood vessels. This effect is achieved by releasing NO (nitric oxide) from endothelial (inner lining of blood vessels) cells. It might be one of the most important health effects of bacoside A in the long run. Maintaining adequate cerebral blood flow is of utmost importance for brain health, cognitive function, and stroke prevention.

Studies show that it does not improve learning mechanisms as much as it attenuates forgetting. Although this difference has importance for academic disputes, from a practical point of view, the result is the same- better recall time, better memory, and better cognitive function.

The recommended (safe) dose for thinking and memory improvement is 300mg of standardized Bacopa Monnieri extract per day for 12 weeks.

Some people might experience bradycardia- those who already have a low heart rate (using beta blockers, for example), should avoid Bacopa Monnieri supplements.

Since the supplement may cause increased stomach acid secretion- those suffering from stomach ulcer should avoid using the supplement.

It may cause increased mucous secretion in lungs, so it’s not recommended for people who suffer emphysema, asthma, COPD and other chronic respiratory diseases.

Is it worth trying?

People who tried it and didn’t have any adverse effects experienced a noticeable memory and focused improvement.  To minimize the risk of adverse effects, make sure you don’t suffer any of the health issues mentioned above.

After all, this is one of the few nootropic agents that has strong scientific evidence behind and trying it wouldn’t defy common sense.